“This is a treasure for all mankind. Too big for my pockets, anyway.”

I’ll admit, my knowledge of the carefree thief Arsène Lupin III was … to say the least, limited when I put on this movie. I knew he was supposed to be the grandson of Maurice Leblanc’s gentleman thief character and was immensely popular in Japan, both in manga and in anime. But that was it, and I hoped the movie would be able to fill me in along the way. So what’s the end result here? Well, the whole thing felt a hell of a lot more like a Tintin adventure than I thought it would. 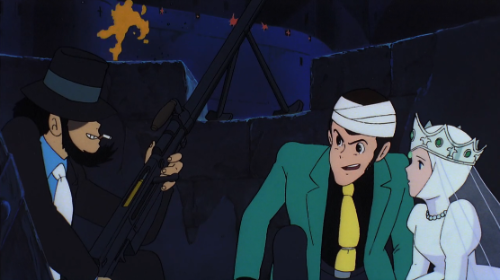 The Castle of Cagliostro follows Lupin (Yasuo Yamada) and his partner in crime, sharpshooter Jigen (Kiyoshi Kobayashi) after a successful heist of a casino in Monte Carlo. While avoiding capture, they notice that the money they stole was counterfeit, which Lupin recognises. They travel to the Duchy of Cagliostro, which Lupin believes to be the source of the fake money and somehow find themselves in the middle of a car chase between a young bride and some goons. They attempt to rescue the bride but find themselves unable, and suddenly in the thick of a mystery and unwilling to ignore the call to adventure.

Lupin recognises the woman as Clarisse, the princess of the region who is to be wed to the Count, who is the country’s regent. With this arranged marriage will cement the Count’s position, and with both his and Clarisse’s ancestral rings, he hopes to uncover the lost treasure of Cagliostro. After being attacked by assassins at their inn, Lupin and Jigen decide to investigate the matter further, and along the way are joined by their samurai friend Goemon, spy and Lupin’s on-and-off love interest Fujiko, and even Lupin’s longtime rival Inspector Zenigata.

From what I understand, Cagliostro is something of a departure for the Lupin brand. It supposedly changed the personalities of the main characters from scheming and lecherous to that of the cheeky, smiling heroes we see now. I don’t know what the series was like before this, so I can only talk about the movie as it was to me, which in short was an absolute delight. Miyazaki purportedly changed the characterisations to better fit the heroic ideal he was looking for, saying it was the character “growing up”, and the end result is a main cast for whom the term heroes is not hyperbolic.

The movie is filled with great set-piece fights, action and adventure, with Lupin doing everything he can to act like the big damn hero of the story. He dives from cliffs, swings across rooftops and fights assassins underwater mostly so he can save the damsel in distress (and only slightly for personal gain). These moments are great and there are plenty in the film to contend yourself with, from the fast-paced car chase sequences at the start to the epic sword fights near the end, Cagliostro is packed with heroics of the highest order.

The characters are great to watch, as well and thank goodness for that. Cagliostro might have gotten by on its action but we spend so much time with Lupin and his friends that if none of them were likeable, it would have made for a really tedious film. By giving them extremely amicable but sharp personalities, Miyazaki and co-writer Yamazaki makes it so that we care if things go right or wrong and doubles our investment in the story. The movie does assume you know who all the characters are, but is thankfully written clearly enough that, as long as you’re willing to ignore those continuity questions, it becomes easy to piece together everyone’s relationship to everyone else.

Miyazaki films are known for their gorgeous landscape shots and even an early film such as this is no exception. The visual language of the film is one of vibrant colours and bold, dynamic moments of action. And I’ll be frank, it’s not comparable to something of his later Ghibli movies, but looking at this from the point of view of a TV anime movie, visually, it’s a beautiful film. It has its own wackadoo style of Saturday-morning-style animation that never goes too far over the top as to not be believable. Miyazaki knows when to switch it up, as well, offering us some gloomy dark scenes that emphasise the dual nature of the castle. Add in some interesting architecture and plenty of castle booby traps and Cagliostro offers us a film that is very much its own thing. 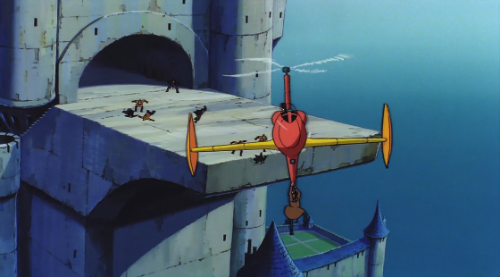 Overall, this film is fun – exactly my sort of picture – and I don’t think I’ve had this much fun watching a movie for this site since probably Tampopo.  The Castle of Cagliostro is a blast from beginning to end, filled with visually thrilling action sequences and some really likeable characters. It might have more of a resonance with longer-term fans of the series (or maybe they’ll hate what it did to their beloved heroes, who knows), but those new to it all won’t be lost for very long. And if this is what the rest of the franchise looks like, then sign me up.

Verdict: The Castle of Cagliostro is an enormous pleasure to watch, from start to finish and I wish there were more films like it. 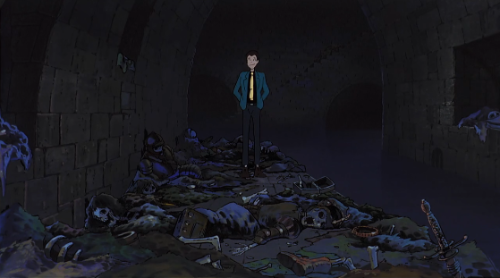