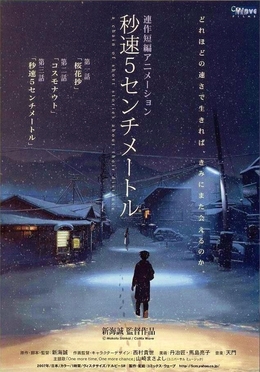 Director Makoto Shinkai brings us a triptych of drama, in his seminal anime film.

“Our lives, spread out before us, are too large: an endless amount of time.”

The quote above details, within the context of the movie, the unfathomable amount of changes we go through within our lives. But, behind the scenes, it could very well have worked as a thesis behind Makoto Shinkai’s breakout movie. Broken down into three episodes, Five Centimetres Per Second looks at life, but chooses to pick it apart so as to better examine it. Each episode deals with a stage in our main character’s life. Tono Takaki is a boy whose parents’ jobs cause him to constantly move schools, and with it forces him to start over. In the first story, he is a young boy in elementary school and befriends Akari Shinohara, with whom he seems to share a lot of interests. 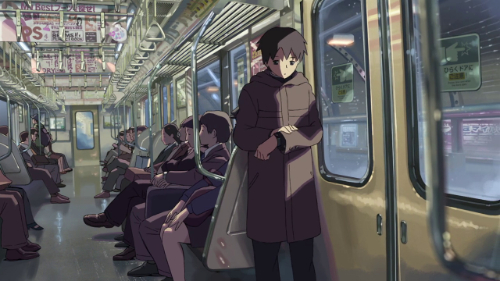 However, after she moves away, they keep in touch through letters, growing a sort of romance, and ultimately Tono chooses to visit her by train. However, heavy snow makes the journey difficult. The second story features a high schooler called Kanae, who has a crush on Tono, but doesn’t know when to tell him or even how, even as they grow closer. She notices he’s always writing emails and texts, and thinks there is someone else in his life. The third story focuses on both Akari and Tono as adults, both independently remembering their times as children together, especially their snowy, emotional reunion that day he caught the train to find her. And that’s sort of it. Three simple, but very real stories. 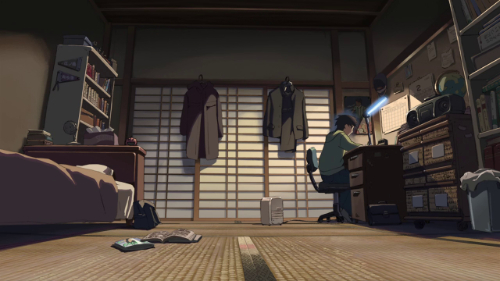 Like a lot of Makoto Shinkai’s (and by extension, studio CoMix Wave’s) movies, Five Centimetres per Second is a very short affair, clocking in at only an hour (with a three minute song break thrown in there for good measure), but considering its slow-paced nature and subject matter, it doesn’t really need to be particularly long. The emotions they present can easily be summarised in short, succinct beats. In fact, any longer and it ran the risk of getting tedious. Calling its segments episodes is a smart idea here, allowing the viewer to see them as individuals before taking in the larger picture: the life, broken down as in the quote. 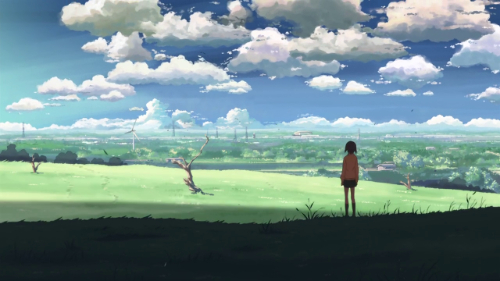 And regarding those episodes, Five Centimetres is a product that benefits from being viewed as a whole: It is definitely stronger than the sum of its parts. Individually, the vignettes tell stories of romances past, present and never-to-be but don’t say a lot by themselves, instead offering very quiet, thoughtful short stories. Together, however, is where they shine, offering a perspective only possible when your main character is constant throughout, learning things as he goes. It could have told three separate stories like the studio’s later feature Flavours of Youth, but by keeping Tono the protagonist throughout it instead offers a deeper, more complex tale. 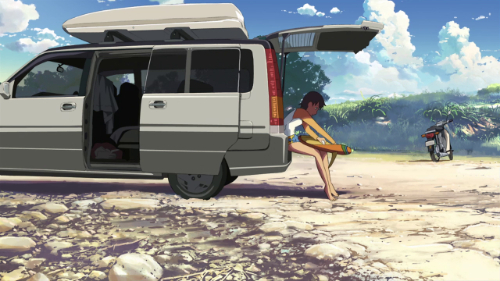 The film, ultimately, is about letting go of the past and moving on. Tono is a boy who is defined by his past – we all are, after all – but who chooses to not let him affect his current life. He moves from one place and school to another, always aware of the way everything has shaped him, but never really looking back. He only does so once: at the train crossing, but never goes back.

Even by the time this movie rolled around, director Shinkai already had a reputation for gorgeous backgrounds, and here they don’t disappoint. Every light source glows, every sunny day brings out the vibrant colours of the world around it. Shinkai’s films seem to be set during a perpetual, endless sunset and they are as beautiful as you’d expect. Where it falters, however, is where CoMix Wave usually does: the character design. Not to say that it’s bad but, rather the everything seems a bit uninspired and unfortunately, not even the protagonist stands out. Despite this, Five Centimetres still shines as another example of excellent storyboarding, cinematography and colour. 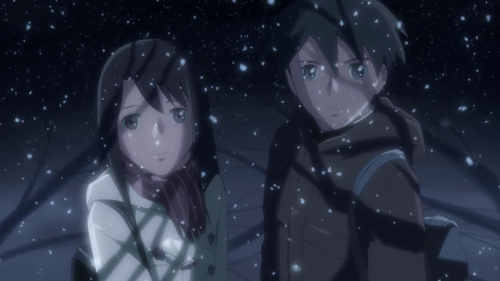 In the end, if this is your first CoMix picture, you’re going to have a great time with it: it’s a stunning film that tells a beautiful story of loss, and wraps it all up in a very visually pleasing package. If you’ve seen some of the studio’s other work, then it’s very much more of the same, narration from a depressed protagonist included. But this isn’t a bad thing. It’s Makoto Shinkai’s biggest strength, and he’s very much playing to it. I personally preferred Garden of Words to this, but not by much – I think the story was tighter, and more gripping. Ultimately, Five Centimetres per Second is one of the best adult-oriented animated dramas, and at least one of its sections will absolutely hit home for a lot of viewers.

Verdict: By focusing on a single main character, Five Centimetres per Second tells a bittersweet story that will probably break your heart, if only a little. 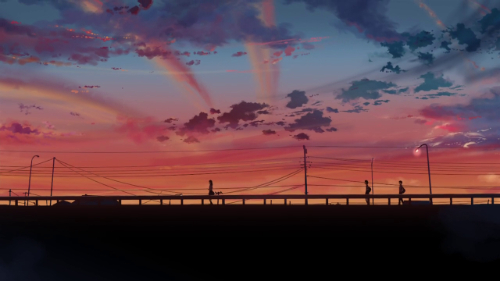