The middle part of Godzilla’s anime trilogy might be the biggest downer in his entire filmography.

“Yes this is … Mechagodzilla City!”

I only saw the first in the Netflix-produced animated Godzilla films a couple of months ago. I recall not disliking it, really and seeing where the potential for the next few in the series would go. But as for anything else? It’s all escaped my memory. I vaguely remember Earth’s evacuation, and the ship everyone is on running out of resources. I also remember that Earth has evolved to accommodate the monsters that live on it. But otherwise, I got nothing. So, here was hoping that the middle film of the trilogy – The City on the Edge of Battle – would do its share of heavy lifting, as well as deliver on that potential. 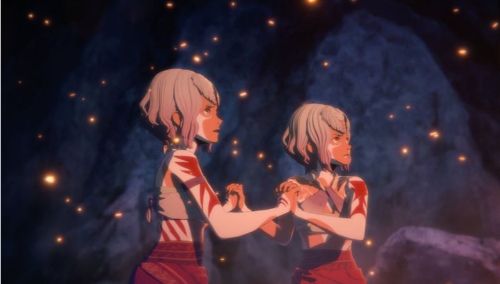 So the film opens exactly where it left off, after OG Godzilla’s devastating attack on our heroes. Haruo has been separated from his friends and is being looked after by an Earth native called Miana. The rest of the crew also encounter a similar Earth native named Maina (who seem to be this version’s equivalent of Mothra’s fairies?), and after everyone reunites, we learn they are sisters. Together, the party makes their way towards where they believe Mechagodzilla is – the machine originally built by the Bilusaludo aliens – and discover the nanomachines it was built out of have expanded into an entire city. From there, a plan is hatched: to lure Godzilla into the city and kill him from there.

The City on the Edge of Battle suffers massively from where it lies in the trilogy. Being the middle film, it can’t really do anything either way. It’s too late to start establishing high stakes, but it’s also much too early to deliver a satisfying conclusion. It does what other middle movies like The Two Towers and Empire Strikes Back does, in that it tries to expand the lore and the world building, whilst also putting the main characters through the wringer, but the result is a film that is strikingly grim. Godzilla films are not known for their vast amounts of humour, admittedly, but they also do have a sense of hope, of victory or something upbeat. Writer Gen Urobuchi is known for his dark works and nihilism, but Psycho-Pass this is not.

This wouldn’t be an issue – after all, Godzilla is a terrifying force of nature, especially in this colossal form – but the story moves along so slowly that it never even takes advantage of its own gritty, survivalist nature. It takes an hour before anything really begins. Everything just feels cheerless for no reason.  So instead of a dark tale about attempting to overcome insurmountable odds, we have a few arguments that sort of touch upon ethical issues which never really go anywhere. Haruo might have a point in his stance against having volunteers who assimilate themselves into the machine, but is also willing to make calls that kill just as many, if not more, people.

With a more interesting protagonist, this could have made for some fascinating moral drama. But like everyone else in this film, Haruo is boring and bafflingly one-dimensional. He gets a love story, sort of, but it’s so out of nowhere (was it introduced in the first film? Who knows) that I would have all but forgotten it if I hadn’t written it in my notes. It’s hard to really care when even Metphies, arguably the most watchable character from the first film, doesn’t really contribute a lot. He’s there – like so many others – to exposit a bit, throw more lore than we need at us, and then go away so Haruo can do something cool or grumpy.

Ultimately, The City on the Edge of Battle is a film that has some cool ideas and a couple of excellent moments of action and tension, but very little else. Its thesis is weak, the characters dull and the majority of the visuals are various shades of grey and blue. It starts and ends with the characters in the exact same place they were in before (maybe a bit more miserable) so the dramatic stakes don’t even feel raised. It’s not awful really (and frankly there are objectively worse Godzilla films out there) but as an exercise in failed potential, it’s definitely up there. There’s still one more part of the story, so let’s hope they’ll at least stick the landing.

Verdict: This is Godzilla in anime form, for crying out loud. It shouldn’t be this boring.