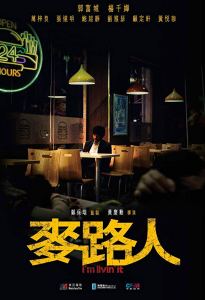 Aaron Kwok gives one of his best performances in a sombre drama about homelessness in Hong Kong.

There’s a term I didn’t know about, until director Wong Hing Fan and actor Aaron Kwok mentioned it during the screening of this film: McRefugee. Originating in Japan, the term refers to people who sleep in 24-hour McDonald’s (or other establishments like net cafes) because they have nowhere else to go. The term has spread to Hong Kong as well, and was the basis of Wong’s film I’m Livin’ It.

Bowen (Aaron Kwok looking strikingly like Tony Leung) was once a hotshot finance guy who made a killing at his job – that is, until he lost it all. Now he hides from his family, and spends his days in Hong Kong barely scraping by to buy food. Now he spends his nights as a McRefugee, along with a few other regulars such Mama (Cya Liu) and her daughter and Uncle Wait (Alex Man). When a recent runaway kid (Zeno Koo) helps Bowen out of a jam, Bowen introduces him to these people, acting as a guide to the life of those between homes.

The basic premise might make you think of Charlie Chaplin’s The Kid, with this bond between Bowen and his new apprentice – but this seems to be as a natural way to introduce the audience to the larger, more interconnected stories of the other side players. By going with a broader approach, we’re able to fully appreciate the society that’s been created, and how each character affects the other’s lives. We see this in Jane (Miriam Yeung), a lounge singer whose attachment to Bowen and his friends is their only connection to the other side.

The problem is that many of the people in the film are hopeless – and sometimes this is because they can’t see past their own stubbornness or ideals. Bowen, Mama and Uncle Wait are all stuck in their respective positions because of shame, trauma or a sense of duty to ungrateful in-laws. But at no point does writer-director Wong Hing Fan blame them for it. This is their reality, and they’re making the best of it.

I’m Livin’ It doesn’t go for pity, nor does it necessarily try to preach any particular lessons, and if there is it’s to society as a whole who might look down on these people or see them as less than human. It’s that much-needed humanising angle that I’m Livin’ It is really going for – and it works really well. We see the sense of community and of helping each other out. This is bolstered by an excellent cast, who feel genuine in their roles and have a wonderful connection and it’s this that ultimately makes the movie as engaging as it is. There’s hope in there – most notably in the child, Nan Nan – and despite the many things that happen to these characters, it thrives.

Director Wong did a lot of research, meeting and studying McRefugees while writing it, and it shows. Everyone is nuanced in a way you don’t see with such a large cast, and as such the group feels like a real group of friends, connected through a single, all-encompassing aspect of their lives. Complete with a simple but effective score and some wonderfully moody night-time shooting, I’m Livin’ It knows how to tell its stories. And that’s the thing: There’s always a story to tell. Everyone in I’m Livin’ It has one, and they’re definitely worth telling.

Verdict: Filled with engaging characters and moments, I’m Livin’ It isn’t optimistic, but it is very human.