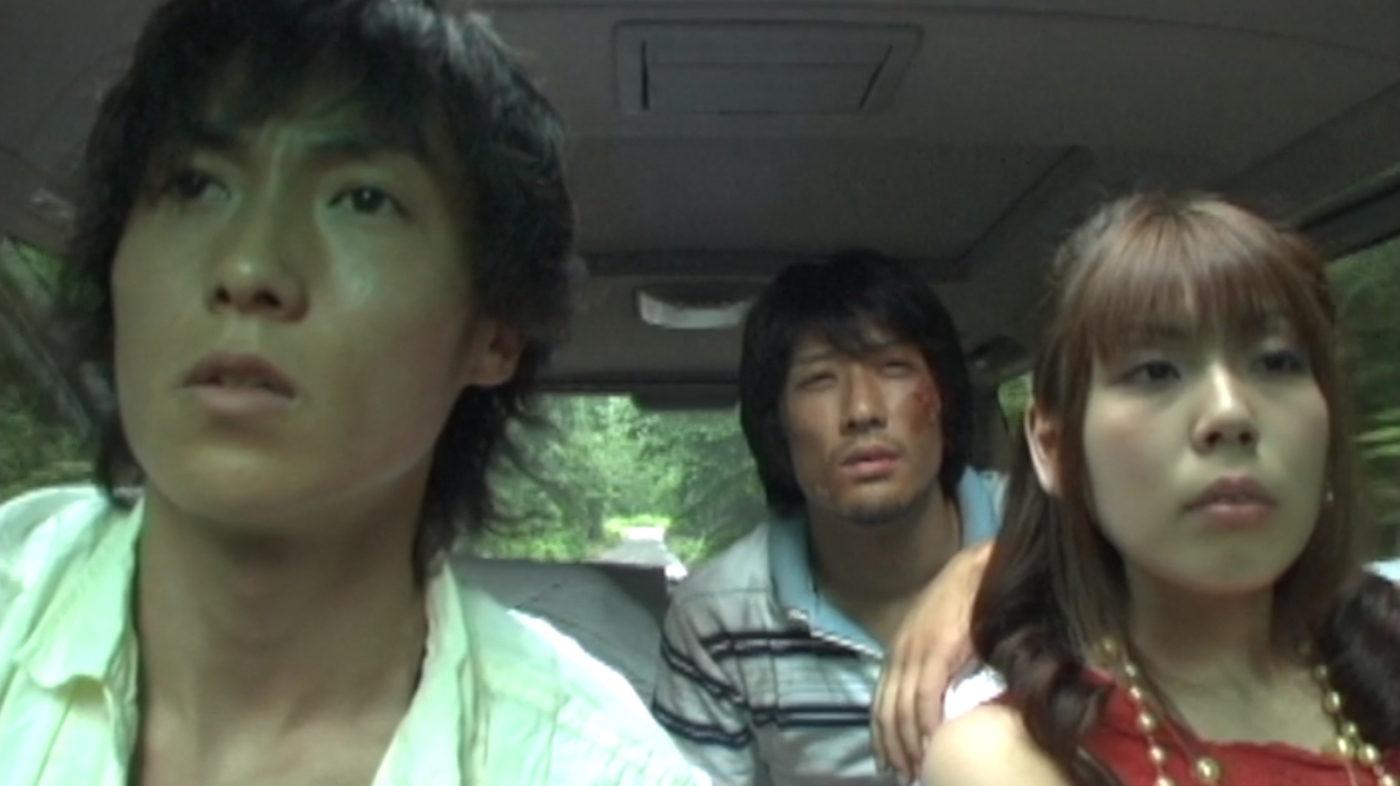 It’s the audience that suffers the most in Hisaaki Nagaoka’s tedious, tiresome attempt at horror.

One of the things that struck me the most about Korea’s 2016 slow-burn horror The Wailing was that, despite its unbelievably long, almost 160-minute runtime, at no point do I remember checking my watch. The story built itself up in a natural way, and there was such an effortless balance between character moments and dread that I could probably have watched another half hour without really seeing the time pass. I bring this up for a reason and that’s because of Ju-On Car (also known as Killer Car ), a Japanese film about a haunted car that in spite of its promising premise is bafflingly unable to fill even a tiny fraction of its miniscule 70 minutes.

OK. So how boring is it? Well, I don’t care to even describe the plot, but for the sake of review I’ll just say that two couples and one tagalong loser (I forget who’s who) go driving in the countryside in a car haunted by the ghost of a woman who was killed in it. But you wouldn’t know that for the first three minutes as all we’re treated to is nothing but opening credits. And when those are over with it cuts to black for way too long and then we’re treated to a further, what, seven minutes of the ghost’s origin story of a person stabbed in a car and whose wound was fingered until she died. It’s as awful to watch as it is to write, and is wince inducing in a way that it probably wasn’t trying to be.

So, roughly twenty per cent of the movie later we’re introduced to our main characters. They’re all very forgettable but at least they’re not unlikeable. Don’t get me wrong, they’re not likeable either because they’re basically hollow shells of humans: each one of them a lumbering zombie struggling to fill their scenes with any sort of personality. Along the way they meet some hitchhiking rando who does nothing but at least looks more interesting than everyone else, and provides precious more minutes of dialogue and movement for the camera to capture.

Guys, I’m not going to lie. It’s really hard to write about Ju-on Car. This isn’t like Train of the Dead which, up until this point, had been the worst film I’ve ever reviewed for this site because at the very least Train of the Dead fucking tried to give us a story and something resembling scares and a climax. Ju-on Car is so devoid of content I’m hesitating to even call it a film. It’s more an experiment to see whether the board of film certification will sit through anything and – judging from its lack of rating, clearly not. They’re so desperate to pad the movie with anything that we’re shown a flashback to a cigarette being stood on about a minute after it happened, and the sepia tone they use is about the most exciting piece of editing in Ju-on Car’s entire miserable existence.  There’s so much dead air I considered if the movie itself wasn’t haunted.

But it’s a horror movie, and cars can be pretty deadly even in the best of times. So at least there’s that to look forward to? If your thing is generic-looking ghost girls lingering in rear-view mirrors or the van – van! It’s not even a cool car! – gushing blood while nobody’s around to be scared by it, then I guess you’ll enjoy yourself? The rest of the scares, as few and far between as they are, fail to even register. Because every single moment of tension, horror and gore is undercut by the fact that basically any scene worth a damn is shot in the middle of the night with amateur equipment. Seeing any of the action becomes an exercise in squinting, and as a chore it’s one with little payoff.

There was one decent gory moment, when the sliding van door crushes a guy’s head. So, I guess that’s cool. I don’t remember who so it doesn’t have a big impact, but it’s still an entertaining ten seconds. There’s also a twist which feels like it belonged in a different (maybe even better) film, but it’s not really touched upon, nor does any of it matter. In the end, Ju-on Car is a film from 2008 that looks like it was shot in the mid-90s, and the main characters probably had more fun driving up and down the same mountain road than I did watching the film.

Verdict: Dreary, wearisome garbage from start to finish, Ju-on Car isn’t dead on arrival as it never even bothered to start.

Overall entertainment: 1/10
Violence: Maybe a 4/10, being generous
Sex: 2/10
Gross wheelchair perverts: 1, but that’s one too many
Driving scenes: About 50% of the film
What to watch instead: This 10-hour movie of paint drying.

CAST
Honoka Ishibashi – One of the characters
Nobuyuki Matsuda – Another character