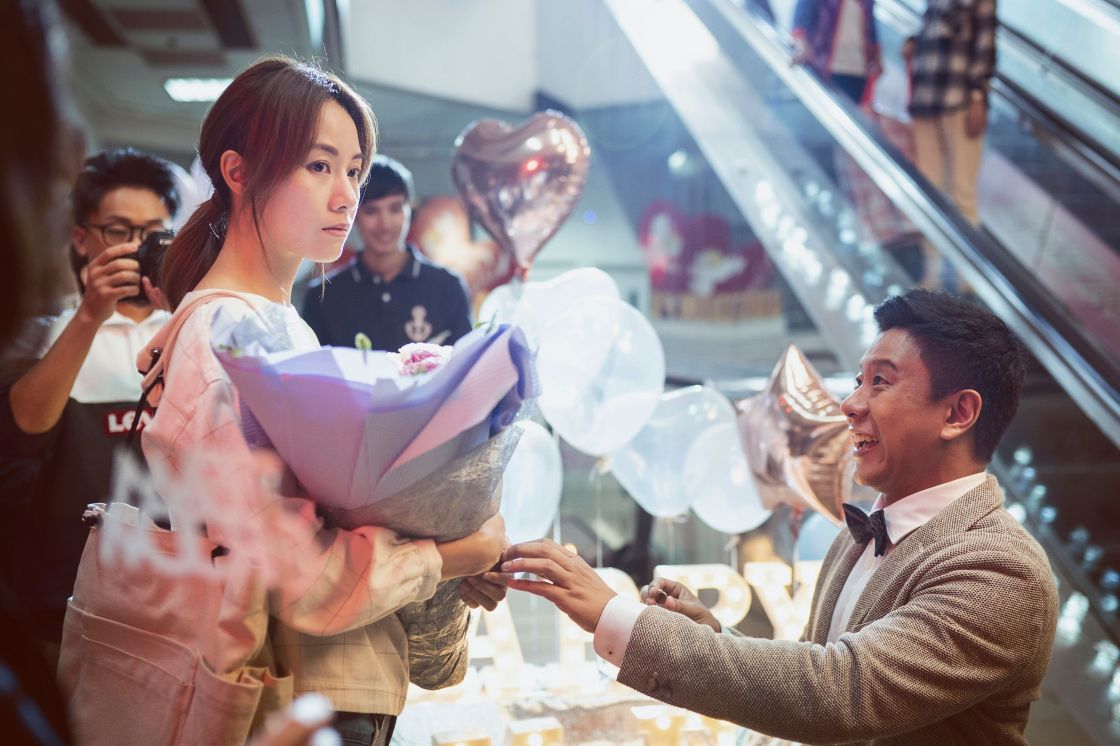 In Norris Wong’s drama, a young woman learns even legitimate marriages can be shams.

“Marriage guarantees you a lifetime contract.”

Fong (Stephy Tang) works at a wedding dress store at the wedding-themed Golden Plaza mall in the Prince Edward district of Hong Kong. A few shops away works her boyfriend of almost eight years, Edward (Chu Pak-hong), a wedding photographer. After Edward proposes to her (in a hideous public display no woman should be forced to endure), she remembers that some time ago she agreed to be paid to enter into a sham marriage with a mainlander (Jin Kai-jie), who needed papers. She discovers the agency never put through the divorce. She meets Yang, her husband of almost a decade, and he agrees to an immediate divorce but only if she helps him get his One-Way Permit. With few other options, Fong agrees.

The synopsis for My Prince Edward comes across like something from a shenanigans-filled romantic comedy, but the film is far from that. The atmosphere, performances and almost complete lack of soundtrack enforces what you might have guessed from its opening minutes: that director Norris Wong has something she wants to say, and won’t fill her movie with unnecessary cheap laughs to keep the audience’s attention. I admit to not knowing a lot about the stigmas surrounding divorce, and the way women in Hong Kong can feel when it comes to marriage (and, honestly I still don’t) but My Prince Edward touches upon these few rarely discussed topics and encouraged me to take a deeper look at them.

Thematically, the movie explores the idea of being trapped both in a large, political way (such as Yang jumping through hoops to acquire the permits and visas he needs) and also in smaller, personal matters and it’s in the latter (especially as to how it pertains to young women) that the movie really shines. Despite her seemingly successful life, Fong lacks any of the basic freedoms Yang and even her fiancé have. Every decision she makes is undercut by her mother-in-law, and often even by Edward, who effectively denies her any choice in his proposal by having it take place surrounded by dozens of people. Her struggle for independence is something a lot of women from any walk of life can relate to.

In getting her points across, Norris Wong does a great job. The problem I had with the story was in the way the characters were portrayed and interacted with each other. Nobody seems like they want to be around the other. I understand that Fong was likely to spend the entire movie down – it happens when you lose every piece of agency in your own life – but the movie vitally forgets to add those minor victories and scenes of joy, especially with Edward. Even in a relationship so close to failure as theirs is, there’s usually hints of the times when they were happy together, but almost every scene of the two of them is punctuated by frequent awkward pauses and moments of gloom.

This does take some of the dramatic stakes out of the story as well. By making it so that we don’t care about our two leads, the film also guarantees that we won’t care whether they stay together or not. The point of My Prince Edward isn’t to see the semi-titular character learn to be a better boyfriend – it’s all about Fong’s desperate search for independence – but in not even trying the film abandons all pretence of tension, too. It becomes more of a wait until learns the inevitable lesson.

But there’s no sense talking about what the film isn’t trying to say, and it’s tricky to go into too much detail about how I view the decisions made by the central characters. My point of view is strictly Western, and no amount of reading and research is going to really change the way I interact with the plot. It’s a film that feels distinctively Hong Kong, and honestly that’s exactly what I wanted from this year’s Chinese Visual Festival. As the first film I caught in the Easter edition of this year’s Focus Hong Kong, My Prince Edward gives me exactly what I want in a festival movie: a different point of view in a topic I could stand to learn a bit more in.

Verdict: Despite some lacklustre characters played by talented performers, My Prince Edward has a point to make, and it does so well with panache in front of and behind the camera.

My Prince Edward screens as part of this year’s CVF. You can buy tickets here.

Overall entertainment: 7/10
Violence: 0/10
Sex: None. Maybe that would have cheered them all up a bit.
Cash stash: Where else but the turtle food
Biggest villain: Edward’s mother. How are you throw away a pet.
Hong Kongers: Can’t squat like the mainlanders.